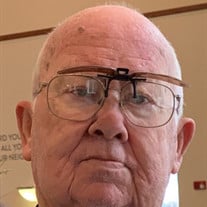 Myrtle Beach......... Walter "Junior" Burgett, Jr., age 74, passed away on Saturday, March 27, 2021 at Tidelands Health, Waccamaw Community Hospital. Mr. Burgett was born in Borderland, West Virginia on April 7, 1946, a son of the late Walter Burgett, Sr. and Patsy Runyon Burgett. He was a 1964 graduate of Kermit High School in Kermit, WV. Mr. Burgett was a lifelong Christian in The Church of God faith and was a member of Chattaroy Church of God in Chattaroy, West Virginia for 51 years and was a member of the Socastee Church of God for the past 23 years. He was formerly employed by N and W Railway as a dispatcher. Mr. Burgett was later employed as an Underground Coal Miner with Kermit Coal in Kermit, West Virginia and Marrowbone Development Company. He had also worked at a funeral home in West Virginia in his younger years. Mr. Burgett was an EMT and a self-taught musician, who was part of a traveling Gospel Quartet in his younger years. He was a licensed pilot flying small aircraft and was an avid Braves fan. Mr. Burgett was predeceased by two brothers, George Burgett and Earnest Burgett and one sister, Irene Cox Lockwood. Surviving are: his wife, who he married in 1967, Brenda Elaine Copley Burgett of Myrtle Beach; two daughters, Carmen Janeine Hatfield (Wilson) of Myrtle Beach and Janet Risley of Springfield, Oregon; three grandchildren, Kendra R. Risley, Christopher M. Risley, and Nathan W. Hatfield; four sisters, Zolene Foster (Joe) of Waynesboro, Georgia, Mary Vanoy (Dan) of Cleveland, TN, Shelvie Booth of White, Georgia, and Priscilla Palmer of Johnson City, Tennessee; and several nieces and nephews. Funeral services will be held at 10:30 AM Tuesday from Goldfinch Funeral Home, Conway Chapel. Services and burial will be held in West Virginia later in the week directed by Weaver Funeral Home in Williamson, West Virginia. The family will receive friends at the funeral home from 5:00 PM until 7:00 PM Monday. Memorials may be sent to Socastee Church of God, 4475 Mill Pond Road, Myrtle Beach, SC 29588. Sign an online guestbook at www.goldfinchfuneralhome.com Goldfinch Funeral Home, Conway Chapel is in charge of arrangements.

The family of Walter Burgett Jr. created this Life Tributes page to make it easy to share your memories.

Send flowers to the Burgett family.