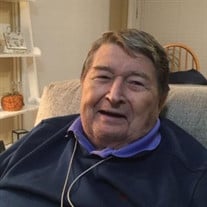 On Monday, December 2, 2019, Walter V. Klimash, loving husband and father, passed away at the age of 85. Walt was born on February 14, 1934 in Johnson City, NY to Walter S. And Helen (Wrona) Klimash. He received his Engineering degree from Syracuse University in 1959. He utilized his degree at General Electric and IBM Corp., retiring from IBM after 22 years, finishing his career as Programs Director. On October 17, 1954, he married the love of his life, Constance (Hronis). Together they raised two daughters. Walt had a lifelong passion for golf. The highlight of his golf career was participating in the ProAm in the BC Open. He could often be heard “cheering” on the Syracuse Orange. Walt was also an avid reader, evidenced by his vast library displayed in his home. He thoroughly enjoyed his Friday night bowling league and participating in the Russian Moods Male Chorus. Walt was a faithful worshipper of the Dormition of the Virgin Mary Russian Orthodox Church, Binghamton, NY and the St. John’s Greek Orthodox Church, Myrtle Beach, SC. His greatest joy in his orthodox faith was being honored in 2017 with the Archangel Michael Award for dedicated church service. Walt served in multiple church councils and was chairman of many fund raisers. He was a true believer and follower of our Lord. Walt was survived by his wife, Connie, and their two daughters Kris Frey (Len) and Karen Soucie (David). He was also survived by his sisters, Carol Harman, Kathy Pankratz, Marsha Wisser (Paul) and his brother, Gary Klimash. He was proud of his 6 grandchildren and 11 great grandchildren. A funeral service will be held on Saturday, December 7 at 2 pm at St. John’s Greek Orthodox Church, Myrtle Beach. Burial will follow at Ocean Woods Cemetery. Visitation will be held Friday, December 6 from 4 to 6 at Goldfinch Funeral Home Beach Chapel. In lieu of flowers, please consider donations to St. John’s Greek Orthodox Church, Myrtle Beach or the Alzheimer’s Association. “Only God knows the pain he endured every day in his last years. His pain is no more.”

On Monday, December 2, 2019, Walter V. Klimash, loving husband and father, passed away at the age of 85. Walt was born on February 14, 1934 in Johnson City, NY to Walter S. And Helen (Wrona) Klimash. He received his Engineering degree from... View Obituary & Service Information

The family of Walter V Klimash created this Life Tributes page to make it easy to share your memories.

Send flowers to the Klimash family.