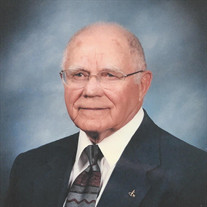 Wayne Kellogg, 99, formerly of Almond NY, passed away Saturday August 15, 2020 at NHC Health Care in Garden City, South Carolina. Born May 6, 1921 North Hornell, NY to Clair and Ruth Kellogg. They moved from Hornell to Canisteo, NY in 1927. He was a member of the first graduating class of Canisteo Central School in 1938. Wayne was attending Alfred Ceramic College when WWII was declared on Dec 7, 1941. He left on Jan 17,1942 for Maxwell Field in Montgomery Alabama, joining the Army Air Corp as Aviation Cadet. Shortly thereafter he joined the US Air Force as a private. Wayne married Betty Jean Martin on March 28, 1942, in Alabama before he set sail for Europe Dec 7, 1942 on the Queen Mary. He was stationed in Watington England and assigned to flight control in charge of the airfield. Eventually, he was assigned to the 8th Air Force Adjutant General Cable Division in Teddington England, outside of London. Later he arrived in St. Germain France outside of Paris, staying until France was liberated. From France he went to Wiesbaden, Germany. He returned home and was discharged from the Army of the United States on Dec 5,1945 as Sergeant AAF (Medals = American Service Medal, European African Middle Eastern Service Medal, Good Conduct Medal, World War II Victory Medal). Wayne lived in Almond NY most of his adult life. He worked alongside his father in Kellogg's Country Store for several years (the store was demolished 12/1987). He joined the postal service as Mail Carrier out of the Almond Post Office retiring in 1984. In 2013, Wayne moved to Pawleys Island, SC. Survivors include Four children- Les (Jean Pissanos) Kellogg, Cindy (AJ) Neville, Gary (Mary Lou) Kellogg, Lucille (Ron) George; Seven grandchildren-Jeff, Amy, Scott, Christina, Kris, Kurtis, Bradley; and 11 great grandchildren. Wayne was predeceased by his father Clair 1980, his mother Ruth 2001, wife Betty 2008, son Les 1996, and grandson Bradley 1980. Wayne enjoyed hunting, fishing, snowmobiling and competition archery. He was a member of the Hornell American Legion Post 440 for 78 years. Served as Fire Chief in the Village of Almond for several years. Was a member of Almond Union Church, Almond Historical Society, and Almond Woodlawn Cemetery Assoc. There will be no calling hours. A service will be held at the Almond Woodlawn Cemetery for family and friends at a time yet to be determined. An online guestbook is available at www.goldfinchfunerahome.com In lieu of flowers, donations may be made to Almond, NY Fire Department or Almond, NY Historical Society. Goldfinch Funeral Home, Beach Chapel is in charge of the arrangements.

The family of Wayne Earl Kellogg created this Life Tributes page to make it easy to share your memories.

Send flowers to the Kellogg family.