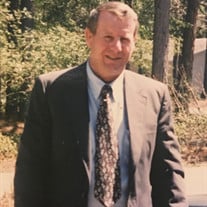 Galivants Ferry… Weldon Smithy Graham, age 76, passed away Monday, January 20, 2020 at his home with his family by his side. Mr. Graham was born in Conway, a son of the late Emory Boyce and Rhonie Johnson Graham. He was a devoted father, son, and caretaker. Mr. Graham was a graduate of Aynor High School and attended Spartanburg Methodist Junior College. Mr. Graham grew up on the family farm and was a collector of many things. He restored old items to new and called his shed his playhouse. Mr. Graham was a member of Faith Baptist Church in Aynor. He was very organized, peculiar, and frugal with his money; however he had a very generous heart for those who were in need. He gladly went without to make it possible to provide for others. Mr. Graham enjoyed any time with his children and grandchildren and was extremely proud when he was told of his children's resemblance to him. He was predeceased by his brothers, Byron P. Graham and Billy "Reese" Graham. He is survived by his sons, Stacey Weldon Graham (Mellanie) and Jason Lynn Graham (Nevely): daughter, Jody Renee Graham, all of Galivants Ferry; grandchildren, Bridget M. Graham, Dustin S. Graham, Megan L. Graham, and Johnson A. Graham; great-grandchildren, Kameron Graham and Konnor Graham, all of Galivants Ferry; brothers, Walden B. Graham of Galivants Ferry, Boyce "Tom" Graham of Galivants Ferry, and Emory "Ree" Graham of Kissimmee, FL; sisters, Wilma Ree Padgett (Billy) of Walterboro and Joyce G. Hardee (Rodney) of Conway; special angel and families friend, Chasity J. Cook; several nieces and nephews. Graveside Services will be 1:00 p.m. Thursday, January 23, 2020 at Antioch Baptist Church Cemetery with Rev. Dean Connor officiating. Visitation will be from 11:30 a.m. - 1:00 p.m. in the church. Memorial may be made to the Prayer Garden at Antioch, 2080 Highway 129, Galivants Ferry, SC 29544; St. Judes Children's Hospital, 262 Danny Thomas Place, Memphis, TN 38105; or Ronald McDonald House, 81 Gadsen Street, Charleston, SC 29401. Please sign an online guestbook at www.goldfinchfuneralhome.com Goldfinch Funeral Home, Conway Chapel is serving the family.

Galivants Ferry&#8230; Weldon Smithy Graham, age 76, passed away Monday, January 20, 2020 at his home with his family by his side. Mr. Graham was born in Conway, a son of the late Emory Boyce and Rhonie Johnson Graham. He was a devoted father,... View Obituary & Service Information

The family of Weldon Smithy Graham created this Life Tributes page to make it easy to share your memories.

Send flowers to the Graham family.