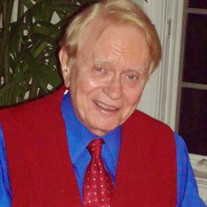 MYRTLE BEACH, SC - Wes Vernon, a pioneer in American radio news, passed away on Sunday, August 8th due to complications of Alzheimer’s Disease. He was eighty-nine years old. A broadcaster, reporter, writer and commentator, he was born Weston Vernon III on August 23, 1931 in New York City. His father, Weston Vernon, Jr., was a partner in the law firm Milbank, Tweed, Hadley and McCoy. His father’s parents were delegates to the 1912 Democratic Convention. His mother, Adelaide Neilson, graduated from the University of Utah and was a school teacher before her marriage. Her great-grandfather, a stonemason, laid the capstones for the Mormon Temple in Salt Lake City. Mr. Vernon began his career in radio in 1950. After briefly studying Journalism at Utah State University, he took a summer job as a disc jockey for a small station (KBUH) in Brigham City, Utah. He decided to stay on at the end of the summer, and soon met his wife, a shy Dutch immigrant named Alida Steinvoort. Her high school class toured the station one afternoon, and she called that evening to request a song, which led to a date. They were married for nearly 70 years. Mr. Vernon worked as a DJ at several radio stations in the west before segueing into the developing field of local news reporting at KBMY in Billings, Montana. In 1963, he became a news director and political specialist for KSL Radio-TV in Salt Lake City. Five years later Mr. Vernon was chosen by KSL's parent company, Bonneville International, to become the chief of its new Washington D.C. News Bureau. He relished providing news coverage from Capitol Hill for several Bonneville-owned radio stations around the country. In 1972 Mr. Vernon accepted an offer to join CBS Radio Stations News Service as a Washington correspondent. He spent the next 25 years reporting on various national and regional news stories. From 1975 to 1997, Mr. Vernon was a host for the CBS program “Crosstalk.” Throughout his career in news, he especially enjoyed covering the Democratic and Republican conventions. After retiring from CBS in 1997, Mr. Vernon was a freelance writer/columnist for a number of publications and websites, including NewsMax and Renew America. He provided numerous book reviews for The Washington Times, specializing in political nonfiction. Mr. Vernon also served as a guest host for the Radio America network. He had a deep passion for rail travel, stemming from childhood memories of watching steam trains pass through Logan, Utah during summer visits to his grandparents. He was an ardent advocate for mass transit throughout his life. For many years, he wrote a monthly column for Railfan & Railroad Magazine, as well as articles for other rail publications. Mr. Vernon was a member of the Screen Actors Guild and the National Press Club. He was a past president and board member of the Chesapeake Railway Association. His other civic affiliations included the Winding Orchard Citizens Association in Maryland. He was a member of the American Legion and was proud to be a past commander of Yellowstone Post 4 in Montana. Over the years, Mr. Vernon received a number of formal honors. One of his most prized awards was the 2014 “Alumnus of the Year” honor from The Browning School in New York City, which he attended as a youth. He also received the Reed Irvine Award in 2010 from Accuracy in Media in Washington. The award recognized Mr. Vernon's "great contribution to freedom's cause, and his promotion of accurate, balanced and honest news reporting." The Wes Vernon Broadcast Scholarship was established this year by his family through the National Press Club Journalism Institute. (https://www.press.org/wes-vernon-broadcast-scholarship) He is survived by and will be greatly missed by his loving family: his wife of 69 years, Alida (Steinvoort) Vernon of Myrtle Beach, South Carolina and their children: Rosanne (Charles) Frank of Silver Spring, Maryland & Myrtle Beach, SC; Weston Vernon IV, of Olney Maryland; Diane (Andrew) Powell of San Francisco, California; and John Randall (Susie) Vernon, of Lake Wylie, South Carolina, plus seven grandchildren and three great-grandsons. Mr. Vernon was preceded in death by his beloved brother, Robert G. Vernon. Services will be held at 1:00 p.m. on Saturday, August 21st, at the Logan City Cemetery in Logan, Utah (1000 North 1200 East). Donations may be made in Wes’ memory to the Fisher Center for Alzheimer’s Research Foundation: https://www.alzinfo.org/

MYRTLE BEACH, SC - Wes Vernon, a pioneer in American radio news, passed away on Sunday, August 8th due to complications of Alzheimer&#8217;s Disease. He was eighty-nine years old. A broadcaster, reporter, writer and commentator, he was born... View Obituary & Service Information

The family of Wes Vernon created this Life Tributes page to make it easy to share your memories.

Send flowers to the Vernon family.