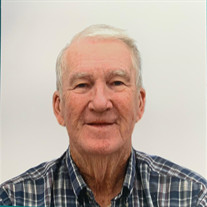 Aynor……..Wilbur "Will" Lee Garland, age 78, passed away on Monday, August 3, 2020. Mr. Garland was born in Boiling Springs, SC to the late Marie and James E. Garland. After serving in the U.S. Air Force he earned his degree from the Georgia Institute of Technology and Georgia State University. He taught at York Technical College and later served as financial aid director and bookstore manager at USC Lancaster. He had the opportunity to join the faculty at USC Coastal in 1974. During his tenure at Coastal Carolina University he served as Assistant Dean of Academic Affairs, a faculty member in the College of Business Administration, Director of the Interdisciplinary Studies Program, Associate Chancellor of Business and Finance and was Senior Vice President of Administration and Financial Affairs. He served on the Coastal Carolina Alumni Association Board of Directors and established scholarships for students attending Coastal Carolina University. Mr. Garland served on the Horry County School Board for a total of 12 years, 10 of those as Chairman. He was a member of Salem Baptist Church. He was predeceased by one sister, three half brothers, and one half sister. Surviving are: his wife of 56 years, Audrey A. Garland and two children, Jeffrey Garland and Melissa Gause and a special son-in-law, Jeff Gause; three grandchildren, Alex and Brooke Garland and Paige Gause; two step grandchildren, Jennifer Jordan (Jason) and Elizabeth Gause; three step great-grandchildren; and two brothers, Robert Garland of Boiling Springs, SC and Thomas Garland of St. Mary's, GA. The family will receive friends at the funeral home from 4:00 PM until 6:00 PM Friday. Graveside services will be private at Salem Baptist Church Cemetery. In lieu of flowers, memorials may be sent to Coastal Carolina University for the Will and Audrey Garland Scholarship, C/O Coastal Educational Foundation, P.O. Box 261954, Conway, SC 29528. Sign an online guestbook at www.goldfinchfuneralhome.com Goldfinch Funeral Home, Conway Chapel is in charge of the arrangements.

The family of Wilbur "Will" Lee Garland created this Life Tributes page to make it easy to share your memories.

Send flowers to the Garland family.