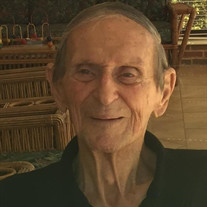 William Corthell Alkire of Myrtle Beach, South Carolina passed away on Wednesday, September 9, 2020 at the age of 89. After months of declining health, William died peacefully with his loving family by his side in the National Health Care Nursing Home. William was born on March 7, 1931 to William Alkire and Helen Schaefer and was the eldest of their two sons. He was a self-made man who started supporting himself at the age of 14. He graduated from high school while working at a truck stop in Doswell, Virginia. Even while working full time and attending high school, he still found the time to play basketball and baseball, two sports he loved dearly. His hardships as a child helped build his strong character. While in high school he met his wife and life partner, Betty. They were married in 1951 and soon after started to raise their family. He found many ways to support his loving family from driving a school bus, to trimming windows in Washington, D.C., to becoming a successful business owner; he even dabbled in real estate and was a landlord in his retirement years. He attended Washington Bible College, graduated and became an ordained minister. His ministry was providing coverage when a temporary pastor was needed. He loved God and maintained a strong faith to the end. He was an active member and former deacon of Glenns Bay Baptist Church. His favorite saying was – “If a believer is wrong it cost him nothing, if a non-believer is wrong it cost him eternity”. In retirement he enjoyed playing golf, traveling, and watching his favorite team, the Atlanta Braves. He traveled with Betty all over the world including a trip to the Holy Lands. William lived a remarkable life which included a long, happy retirement. Most importantly he was loved and will be remembered for his strength, character, wit, smile and infectious laugh. Finally, William was a loving, devoted and supportive husband and father. All will miss him. His family celebrates his life and is eternally grateful for their time with him. He is survived by his beloved wife of 69 years, Betty Alkire; daughters, Dianne Griner (David) of Murrells Inlet and Geri Schlotterbeck (Woody) of MD; a son, Tom Alkire of Myrtle Beach; grandchildren, Dawn Morrissey (Glenn), Ryan Schlotterbeck (Teressa) Rachel O’Shea (Thomas) and Jonathan Griner (Leigh Ann); great grandchildren, Ella and Jackson Morrissey, Hadley and Hudson Schlotterbeck and Avery O’Shea. The family would like to express our appreciation for the end of life care provided by NHC and Caris Healthcare staff. In lieu of flowers, donations to Samaritan's Purse would be appreciated. Services will be private.

William Corthell Alkire of Myrtle Beach, South Carolina passed away on Wednesday, September 9, 2020 at the age of 89. After months of declining health, William died peacefully with his loving family by his side in the National Health Care Nursing... View Obituary & Service Information

The family of William C Alkire created this Life Tributes page to make it easy to share your memories.

Send flowers to the Alkire family.