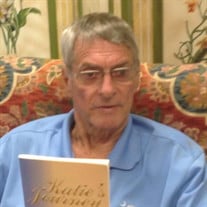 William “Bill” Worthington Sirmon Jr., 75, of Pawleys Island, passed away peacefully at his home with loved ones by his side on May 25, 2020. Bill was born December 15, 1944 in Mobile, Alabama, a son to the late William W. Sirmon Sr. and Mary Cleo Harrison Sirmon. As a young man, Bill attended AC Flora High School. He served as President of the Student Body and also played baseball. He graduated with the class of 1963. He graduated from The Citadel in 1967. While there, he served on the Honor Committee and even won the freshman basketball free throw contest. He graduated with a Bachelor’s Degree in Political Science. He also proudly served in the US Marine Corps. As an adult, Bill had an extensive career in real estate development and was involved in the planning of Broadway at the Beach in Myrtle Beach. In his leisure time, Bill was very active and enjoyed jogging and swimming. He was also an accomplished writer, with published works including “Tales of Litchfield Beach” and “Katie’s Journey”. Bill is survived by a loving family, including his devoted wife Iris McLain Sirmon, his son John Sirmon and daughter Jennifer Fox, his step-children Carol, Mark and Michael Neal as well as his step-sons Shawn and Jason Matthews. He is also survived by his 8 adoring grandchildren, his brother Al Sirmon and nephews Will and Jay Sirmon. No funeral services are scheduled at this time, however a service will be held at a later date, to be determined by the family. In lieu of flowers, memorial donations can be made in Bill’s honor to the Leukemia & Lymphoma Society (lls.org). Goldfinch Funeral Home of Murrells Inlet is honored to serve the family. Condolences may be left online at www.goldfinchfuneralhome.com.

The family of Mr. William "Bill" Worthington Sirmon Jr. created this Life Tributes page to make it easy to share your memories.

Send flowers to the Sirmon family.