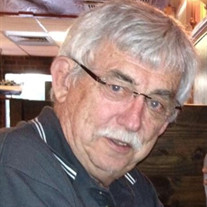 Conway… William Albert "Bill" Chapman, 79, passed away on March 12, 2022 surrounded by his loving family. Bill was born on May 16, 1942 in Anderson, SC to the late William Thomas Chapman and Frances Sanders Chapman. He graduated from Boys High in Anderson SC in 1960 and Wake Forest University in 1964 with a BA in History. He was also a member of Pi Kappa Alpha fraternity at Wake Forest. After college, he served in the Army Reserve during the Vietnam War and then he went to work for the family business, Tom Chapman Tire Service, where he earned his lifelong knowledge of the tire business. Bill married the love of his life, Susan Stogner of Conway, SC in 1968 and welcomed four children, William "Chip" Albert Chapman II (deceased), Harriette Cooper Chapman of Little River, SC, Clifton Alexander "Clif" Chapman (Brandy Vereen) of Conway, SC and William Thomas "Tab" Chapman (Michelle O'Brien) of Conway, SC. He was also the proud grandfather to Shelby, Cameron, Anna-Kate and Ella-Grier. Bill is also survived by his brothers, Richard Booth Chapman (Georgeanne) of Nashville, TN, David Marion Chapman (Suzanne) of Anderson, SC and Stephen Sanders Chapman (Linda) of Cape Girardeau, MO; and his beloved dachshund, Abby. Bill always had a knack for the tire business. Over the decades he developed many new products in the industry. His most recent startup was Diamond Back Classic Radials, a company which manufactures tires for the vintage car industry. Today that company is deemed the premiere tire in the industry and is distributed worldwide. A private graveside service will be held at Lakeside Cemetery in Conway, SC. In lieu of flowers, memorials may be sent to Noah's Ark Rescue, 4084 Spring Island, Okatie, SC 29909, (843) 540-6755, [email protected] or to Low Country Animal Rescue, P.O. Box 952, Ladson, SC 29456, [email protected] Please sign an online guestbook at www.goldfinchfuneralhome.com Goldfinch Funeral Home, Conway Chapel is in charge of the arrangements.

Conway&#8230; William Albert "Bill" Chapman, 79, passed away on March 12, 2022 surrounded by his loving family. Bill was born on May 16, 1942 in Anderson, SC to the late William Thomas Chapman and Frances Sanders Chapman. He graduated from... View Obituary & Service Information

The family of William Albert "Bill" Chapman created this Life Tributes page to make it easy to share your memories.

Send flowers to the Chapman family.