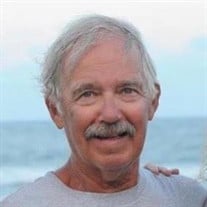 William Everett “Coach” Cloud of Murrell’s Inlet, South Carolina passed away peacefully at home on March 6, 2021. He was 82 years old. Everett was born in Washington D.C. in 1938, youngest child of Etienne Leroy and Dorothy Ball Cloud. He grew up with his older brother and two older sisters in Chesterbrook, Virginia, surrounded by cousins and friends from their tight-knit neighborhood community. He played baseball, basketball, and football at both Falls Church and McLean High Schools, graduating from McLean in 1957. He received a scholarship to the University of Maryland and was drafted to play ball by both the Dallas Cowboys and Pittsburg Pirates. He chose instead to follow the path of his mother and sister and became a teacher and coach at George C. Marshall High School in Falls Church, Virginia. During that time earned his Masters of Education degree at George Washington University. “Coach” was a popular teacher and revered coach at Marshall and later at Annandale High School. His influence on both students and players was long-lasting. He was recognized as a skillful, calm, and thoughtful leader, who truly cared about the young people he guided. He retired from teaching and coaching in 1988. His influence on students and, especially, players has been long-lasting. Everett married his beloved wife, Candy, in 1980 and together they built a fun-filled life. Each had married their best friend and the depth of their commitment grew throughout their life together. Everett was a loyal man, who had forged strong bonds with his forever friends from his life in Northern Virginia. He sustained those friendships throughout his life. Always a beach lover, he and Candy moved to Murrells Inlet, South Carolina after retirement. There, he spent many days on the links and enjoying their time at Wachesaw Plantation. Once again, they created a circle of friends, who treasured boat rides, beach days, and cocktail hours spent with “Coach”. Those traditions continue through his two devoted daughters, Bridget and Rachel, who share his gift for laughter, friendship, hard work, and enjoying life. “Oach/Coachie” was idolized by his three grandchildren, Jake, Hailey, and Emma. If you were lucky enough to know “Coach”, you knew how kind, modest, hard-working, and humble he was. He loved to tell outrageous stories and enjoyed playing and watching sports of all kinds. No one could match his play-calling and knowledge of sports trivia. He was a big presence and had an even bigger heart. How lucky we were to know and love him. Everett is survived by his sweetheart of 41 years, Frances “Candy” Cloud; by his adoring daughters, Bridget Brancato of Myrtle Beach, South Carolina and Rachel Cloud of Annandale, Virginia; by his devoted son-in-law Paul Brancato; and by his delightful grandchildren, Jacob Aidan Watts. Hailey Elisabeth Brancato, and Emma Catherine Watts. He is also survived by two brothers-in-law, Ken Wilson and Fred K. Little, as well as many nieces and nephews. He was preceded in death by his older siblings: Etienne, Barbara Ann Little, and Nancy Wilson. He will be missed. A service will be held in April in Southern Virginia. In lieu of flowers, please send donations to Help 4 Kids or Hospice.

The family of William Everett "Coach" Cloud created this Life Tributes page to make it easy to share your memories.

Send flowers to the Cloud family.