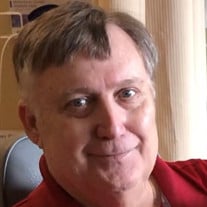 Murrells Inlet……… William Anthony "Tony" James, age 71, passed away Monday June 7 after an illness with his sister and brother-in-law by his side. Tony was the son of William Arthur and Beryl Naylor James of Myrtle Beach. He was an avid sports fan and spent many happy days in the woods or on the river with his dog Belle, whom he adored, playing football, soccer and golf and following all sports on television. Mr. James graduated from Randolph Macon Military Academy in 1969 as Battalion Commander and co-captain of the football team, earned a BA from St. Andrews College and was the owner of William A. James Realty and Grand Strand Fitness and Racquet in Murrells Inlet. Tony was involved in many civic and community activities such as Civitan Club, Blue Knights, Ducks Unlimited, American Legion Riders and others. He is survived by his daughter, Elizabeth Packard of Virginia, a sister, Randel James Hardwick and her husband, Steven of Johns Island S.C., a nephew, Travis Hardwick and his wife Elizabeth, their children Adam and Anne of Blythewood S.C. and a special friend, Debra M. Hunter of Front Royal, Virginia. Tony also had numerous local friends who were like family to him and many RMA "brothers". A Celebration of Life Service will be held Graveside at Ocean Woods Memorial Cemetery, Thursday June 17, 2021, at 11:00 AM with Dr. J. Kirk Lawton, Jr. officiating. In lieu of flowers, the family has asked that you make a donation to The Randolph Macon Class of 1969 Scholarship Fund at http://rma.edu/ there is a donate button at the top. Select "other" and type in RMA Class of 1969 Scholarship Fund and there is a tribute area at the bottom of the page to put Tony's name. Goldfinch Funeral Home, Beach Chapel, is assisting the family.

Murrells Inlet&#8230;&#8230;&#8230; William Anthony "Tony" James, age 71, passed away Monday June 7 after an illness with his sister and brother-in-law by his side. Tony was the son of William Arthur and Beryl Naylor James of Myrtle Beach.... View Obituary & Service Information

The family of William Anthony "Tony" James created this Life Tributes page to make it easy to share your memories.

Send flowers to the James family.