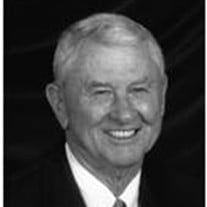 William David "Billy" Witherspoon went to live eternally with Jesus in Heaven on July 13th, 2021, at Conway Medical Center in Conway, South Carolina. Billy was born to Hubert Henry and Pearl Copeland Witherspoon on August 17th, 1935, in Timmonsville, South Carolina, on a small hog and tobacco farm. He was preceded in death by his sister, Boyd Witherspoon Weaver (Lansing). Billy is survived by his wife of 63 years, Linda Johnson Witherspoon, two sons, William David Witherspoon, Jr. (Louise), and Hubert Craig Witherspoon (Fran), and one daughter, Linda Anne Adams (Dent). He also leaves eight grandchildren, Virginia Witherspoon Merritt (Justin), Spencer Craig Witherspoon (Jordan), Gillen Witherspoon Schecter (Aaron), Sarah Elizabeth Witherspoon, Rebecca Witherspoon Stubbs (Brandon), William David Witherspoon, III (Julia), Anne Miller Harper (Walt), and Mary Webb Parker (Ken), as well as six great-grandchildren. A rural, farming boy, Billy was proud to receive an education from Clemson University, then, Clemson Agricultural College. Upon graduation from Clemson in 1956, he began serving the citizens of South Carolina for the next 50 years. His first service began as a Clemson Extension agent and continued in different capacities for 34 years. He was elected and honored to become the President of the National Association of County Agricultural Agents during his tenure. Billy also served in the US Army Reserve. After retiring from Clemson Extension, Billy became a public servant in a new manner. Elected to the South Carolina House of Representatives (District 105), he represented the citizens of Horry County for 16 years, serving as the Chairman of the Agriculture, Natural Resources and Environmental Affairs Committee for his last several terms. Because of his service, Billy was given the Order of the Palmetto, was inducted into the Frank Lever County Extension Agent Hall of Fame at Clemson University, named to Clemson University's commemorative Scroll of Honor and Extension's Distinguished Service Award, was named Clemson University's Alumni of the Year, and has received many other distinguished honors throughout his lifetime. Billy's 50 years of public service to the state of South Carolina was outmatched only by his loyalty and devotion to church and family. He was a faithful member of Conway First Baptist Church for many years, where he served as a deacon, Sunday School teacher, and pastor search committee member. Billy's family was always a priority. His love and compassion for his family could not be measured. His guidance, love and generosity will be felt for generations to come by those who have known him as husband, Dad, Grandpa Billy, Gramps, Papa, Papa Billy, G-Pa, Uncle Bill, mentor, colleague, or friend. A memorial service will be held at Conway First Baptist Church on Friday, July 16th at 11 AM with Rev. Rocky Taylor oficiating, followed by visitation. Goldfinch Funeral Home will oversee arrangements. In lieu of flowers, memorials may be made to Conway First Baptist Church, Help 4 Kids of Myrtle Beach (help4kidssc.org/donate/), or CAP: Churches Assisting People (capconway.org/take-action). Sign an online guestbook at www.goldfinchfuneralhome.com Goldfinch Funeral Home, Conway Chapel is in charge of arrangements.

The family of William D. "Billy" Witherspoon created this Life Tributes page to make it easy to share your memories.

Send flowers to the Witherspoon family.