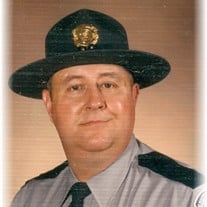 Conway... W.E. “Ed” Thompson, age 78, passed away Thursday, November 25, 2021 at his home. Born December 12, 1942 in Horry County, he was the son of the late Willie Roscoe Thompson and Mitchell Carter Thompson. Mr. Thompson was a graduate of Conway High School Class of 1960. Following graduation, he honorably served his country in the United States Army during the Vietnam era. Mr. Thompson was a member of The American Legion, the Conway Masonic Lodge #65 A.F.M., and Litchfield Camp 132, SCV. He retired honorably from the South Carolina Highway Patrol. Along with his parents, Mr. Thompson is predeceased by three infant brothers and his chihuahua, Tippy, who he loved dearly. Mr. Thompson married Sybil Stalvey Thompson on June 12, 1970. They recently observed their 51st wedding anniversary on June 12, 2021. Their union produced a son, Brian E. Thompson (Michelle) and a daughter, Susan Camille Thompson (Tom Del Percio). That resulted in five grandchildren, Briggs E. Thompson, Logan C. Nichols (Jonathan), Dillon R. Thompson, William V. Hucks, Jr., and Lance M. Thompson. Graveside services with Military Honors will be held at 2:00 PM Sunday, November 28, 2021 at Hillcrest Cemetery with Rev. Mike Gerald and Terry Carter officiating. The family will receive friends one hour prior to the service at the grave. The family would like to extend a special thank you to the staff of Crescent Hospice for their outstanding care during this time. Memorial donations may be made in Mr. Thompson’s honor to the charity of one’s choice. Please sign the online guestbook at www.goldfinchfuneralhome.com Goldfinch Funeral Home, Conway Chapel is in charge of arrangements.

The family of W.E. "Ed" Thompson created this Life Tributes page to make it easy to share your memories.

Send flowers to the Thompson family.