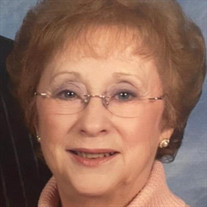 Myrtle Beach, SC Wilma Jean Seggie went to be with her Lord and Savior at the age of 89 suddenly on Thursday, December 16, 2021 at her home. Jean was born on September 9, 1932 in Midlothian, Maryland to the late Wilburt and Jessie Filer Hoban. Jean was a kind and loving wife, mother, grandmother, and great-grandmother. Jean was born and raised in a log cabin in a small coal-mining town in the mountains of Western Maryland. As a coal miner’s daughter, her daily job was to shake out the coal from her father’s clothes, who called her Queenie. She graduated from Beall High School in 1950, then went to work at Frostburg Pajama Factory sewing pockets on the pajama tops. She and her husband, Lloyd “Bugs'' Seggie, recently celebrated 68 years of marriage. They met when Bugs was born, a year after Jean, and began to date at age 14. There were married on December 5, 1953. They had three daughters: Joleen Tinsley, Jolinda Smith, and Amy Herrera. Bugs was in the Air Force; they were stationed in Germany, Belgium, Washington DC, Illinois, New Mexico, Arizona, Mississippi, Delaware, and finally South Carolina where they have resided for 47 years. She became a member of Socastee Baptist Church when she moved to South Carolina. She was the nursery coordinator, taught Sunday School and Vacation Bible School, and was incredibly involved throughout the church for more than 25 years. She served lunch at Calvary Christian School and taught Weight Watchers for 28 years, and also worked at Har-Nel ceramics with her best friend, Jane Yancey. Her hobbies included cake decorating, sewing, cooking, ceramics, and most importantly spending time with her family. Jean was a refined lady, a spitfire, and a mom and friend to everyone. She has passed on her wisdom through her stories, which her family and friends always enjoyed. She never met a stranger, she loved everyone, and became mom and grandma to many; her home was welcome to all. Bugs would often say, "Don't bring any ‘strays’ home" when she would leave the house. Jean was a wonderful listener and everyone knew their secrets were safe with her. Her patience and soft spoken voice brought calmness and comfort to others. She is preceded in death by her sisters Joann “Annie” Grischow and Eileen "Cotton" Fatkin, Deanie Seggie Cutter (sister "in-law"), and her special friend Jane Yancey. Jean is survived by her husband and best friend, Lloyd “Bugs” Seggie. She is also survived by her daughters Joleen and her husband Rick of Myrtle Beach, Jolinda Smith and her husband Clay of Durham, NC and Amy Herrera and her husband Oscar of Myrtle Beach; grandchildren Jason Smith, Chuck Tinsley, Aaron Smith, Amanda Tinsley, Jesse Herrera, Kristen Herrera, and Nicole Herrera; great granddaughter Emerald Smith; and sister Sandra Hoban Skerratt. A Celebration of Life Service will be held at 2:00 PM on Tuesday, December 21, 2021 at Socastee Baptist Church with Dr. Micah Lane and Rev. Greggory Heinisch officiating. The family will receive friends from 1:00 PM to 2:00 PM at the church. The service will be available for livestream at facebook.com/SBCMyrtleBeach.com. A special thanks to her homehealth care teams: Kristen, Patrick, Ashley, Christine, Vanessa, Julie, Sylvia, and many more. Memorials may be made to Socastee Baptist Church Building Fund, 3690 Socastee Blvd. Myrtle Beach, SC 29588. Goldfinch Funeral Home, Beach Chapel is assisting the family.

Myrtle Beach, SC Wilma Jean Seggie went to be with her Lord and Savior at the age of 89 suddenly on Thursday, December 16, 2021 at her home. Jean was born on September 9, 1932 in Midlothian, Maryland to the late Wilburt and Jessie Filer Hoban.... View Obituary & Service Information

The family of Wilma Jean Seggie created this Life Tributes page to make it easy to share your memories.

Wilma Jean Seggie went to be with her Lord...

Send flowers to the Seggie family.