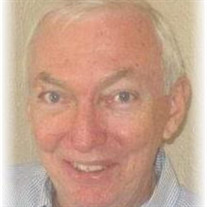 Conway… After a hard-fought battle with cancer, Winford Jordan, age 71, went home to be with the Lord on September 23, 2020 surrounded by his loving family at the Medical University of SC. He leaves behind a wife, Martha Jordan of 48 years. They met in Michigan while he was serving in the United States Air Force. He served his country for four years and earned the rank of Staff Sergeant. He and Martha later married and moved to his hometown of Conway, SC where they have raised their two sons. He was a loving and devoted husband, father, Papa, brother, and a friend to all who knew him. He enjoyed fishing, picking up oysters (and eating them with family and friends), fish stews, spending time with his family, studying his Sunday School lessons, and reading the Bible. He was a true jack-of-all-trades. He was a member of the Gideons International and loved sharing his faith with others. He worked with the Good News Club in Aynor Elementary, was an active Sunday School teacher at High Point Baptist Church, where he also served on numerous committees and had actively served on the deacon board since he was ordained in 1976. Winford leaves behind his wife, Martha Jordan, two sons Adam (Joni) and Kevin (Lisa) and three grandsons (Austin, Cade and Carson). He also leaves behind 4 brothers and 2 sisters: David (Wanda) Jordan, Marshall (Joyce) Jordan, Ricky (Cindy) Jordan, Bruce (Gayle) Jordan, Debbie (Charles) Johnson, Sarah (Dennis Skipper) and Vernon (Cynthia) Jordan. He was preceded in death by his parents, Arthur and Marie Shelley Jordan and one brother, Kenneth Jordan. The funeral will be held at High Point Baptist Church on Friday, September 25, 2020 at 11am. Burial will follow in the church cemetery. The family will be receiving visitors beginning at 9:30 am in the church sanctuary. The family also requests that donations be made to either the Gideons International, P.O. Box 97251 Washington, DC 20090-7251 or High Point Baptist Church, 6923 Juniper Bay Road, Conway, SC 29527 in lieu of flowers. Please sign the online guestbook at www.goldfinchfuneralhome.com Goldfinch Funeral Home, Conway Chapel is in charge of arrangements.

Conway&#8230; After a hard-fought battle with cancer, Winford Jordan, age 71, went home to be with the Lord on September 23, 2020 surrounded by his loving family at the Medical University of SC. He leaves behind a wife, Martha Jordan of 48 years.... View Obituary & Service Information

The family of Winford Jordan created this Life Tributes page to make it easy to share your memories.

Conway…
After a hard-fought battle with cancer, Winford Jordan,...

Send flowers to the Jordan family.